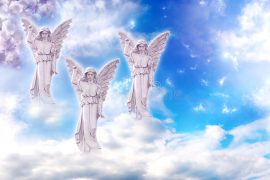 No Comments on ANGELS AND ARCHANGELS ACCORDING TO NEW AGEPosted in Spirituality By Editor in ChiefPosted on November 11, 2019May 6, 2021

Angels and archangels, they pop up in different religions, but they also fit into the New Age movement. What they have in common is that they are free of time and space, not definable.

Angel is according to the dictionaries “a bodyless, immortal spirit, limited in knowledge and power,” “a higher being who has conquered matter,” and “a messenger of god.”

Archangel is, according to the dictionaries, “a spirit of heaven in rank above an angel,” “a special high-ranking angel,” and “several angels occupying a special place .”

Angels and archangels are at least found in the following religions, namely:

According to these religions, angels and archangels are created by God. The different religions do not all use the same archangels (some overlap). For example, Islam knows only three; Judaism knows five, and Christianity knows seven. They do have similar “roles” in religions.

New Age is a Western spiritual movement that originated in the 20th century. In the late 1960s and early 1970s, a different-thinking and acting movement (hippies) emerged. It heralded the new era where “love” and “light” were the new words for their own spiritual growth that people wanted to go through.

As the definition says, it is a bodyless being, and so the angel with wings, with harps or spears sprouted from the human mind in a desperate attempt to shape the person (as also the accompanying photos). However, it is not based on anything. This applies to the perspective of religion but also a new age.

Angels and archangels are always put away as spiritual beings full of love, light, and joy. The different roles are explained as follows:

* God is a collective name for the driver of what happens after the passing. That can be God like in a religion, but it can also be another “almighty”.

The angel guards the man a little, but can, in particular, do something about the prayers of that same man. You can almost invoke the nameless angels that are always around you. They do nothing on their own because free will is essential. This can be done in prayer, speaking aloud, meditating, or in free thoughts.

These angels are with you from birth to death, and most people have two with them. If you have experienced heavy things, there may be several angels around you. For bulky cases, think of a near-death experience or a severe accident.

The archangels are specific guardians of man, and archangels do have a name. Certain professions, such as nurses, ambulance personnel, or police officers, may “guide” you, such as Rafael or Michael. All in all, the archangel has a unique position.

So you don’t have to be a fan of religion to invoke angels. New Age gives it a different, more free explanation. One that places the responsibility for ‘making use’ with the person. This way, you can carry an angel with you during a specific assignment and have him occasionally pass through in your mind. But you can also take a more explicit reminder such as an angel on a chain or an angel in your house.

In the latter case, you will be reminded if you walk past it, for example. It is a form of communication. With the retention of your responsibility, you ask for some help or assistance.

Some people are susceptible and can suddenly feel a sigh of wind rolling over their skin like nothing out of the blue, and that can be the angel. Others see a kind of flash in the corner of the eye, and that can also be a sign that the angel is there. But even if you don’t see anything, the angel that you call on will still be there.

As said, there are countless angels, and they can be called anonymous. The archangels do have a name and a more precise “function,” namely:

Ariel means as much as “lion of God.” She is brave and powerful and protects the elements of earth, water, and air. As protector of the elements you can call on her, but also for extra courage and self-confidence. She helps animals in need with Archangel Raphael. Furthermore, it supports healers or teachers and can play a role in issues that are related to the environment.

Raphael means as much as “God heals.” He is a mighty healer, and he likes to help people who are in the process of healing. Raphael can also guide you through your spiritual journey to spiritual growth. He lets things come to you through dreams, sudden ideas, and intuitive.

Azrael means as much as “he who helps God.” If for whatever reason, you are sad, this archangel can support you with a great deal of patience. This angel can also assist you during the transition.

Chamuel means as much as “he who sees God.” If you have questions in personal areas about the purpose of life, relationships, and friendships, or even your professional career, you can go to Chamuel. This archangel helps you to strengthen the foundation among you.

Jophiel means as much as “beauty of God.” She is the one behind the artistic life. She inspires you, but also the courage to take gas back during hectic periods of life. In this way, you come to see the beauty of life again, and that gives room to be inspired again.

Gabriel means as much as “God is my strength.” Gabriel helps in the “family situation.” Think of pregnancies or the undesired failure to do so, but also adoption. She can also support you creatively, supports writers and journalists. According to the Bible, it was she who told Maria that she would have a son.

Haniel means as much as “glory of God.” This archangel can help you shape your spiritual development, and he also supports natural healing remedies.

Michael means as much as “he who is like God.” He has an important task, namely “redeeming the world and the people of this world from fear,” and he supports the so-called lightworkers . He can strengthen you if you are mentally and physically exhausted. It gives you courage and helps you to keep focusing.

Jeremiel means as much as “grace of God.” Among other things, he helps souls who have just passed over to oversee their lives. However, even if you are still alive and you need insight into how your life has gone so far and how you should continue, he can assist you. He can also help you find your balance in life.

Raguel means as much as “friend of God.” He is more or less the coordinator among the archangels. The archangels must work well together. He can also support you if you suffer from too little self-esteem or if you feel depressed. He can bring you strength and harmony.

Uriel means as much as “light of God.” He can work predictively, clarify confusing situations, and is seen as the most intelligent archangel. He works very strongly in the background as an archangel and will give you the feeling that you have thought everything up yourself.

Raziel means as much as “the secret of God.” He works in His presence and knows a lot. He can help you understand esoteric matters, but he can also help you further develop your possible psychic gifts. You can also call upon him as a ‘guide’ during your travels.

Zadkiel means as much as “justice of God.” This archangel can help you to be compassionate, to release convictions, and to put your ego back in reasonable proportions. He can help you with all kinds of emotional aspects.

An exception to the rule are two archangels who have once been human:

Whatever your approach to trust and belief in angels and archangels, it can support you at times when you need it. It’s great that everyone thinks differently about angels and archangels. This does not alter the fact that these “roles” that have crept in for quite a few people actually help many people in all kinds of daily processes.

ANGELS AND ARCHANGELS ACCORDING TO NEW AGE